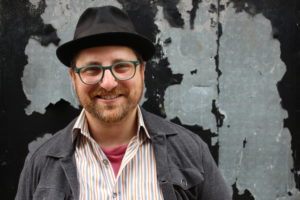 When I was a sophomore in high school, I founded Sideway Theater Company with the intention of offering a sideway view of the world.  My aim was to provide a theatrical home where other artists could express their own uniquely slanted perspectives.  Along the path of creating a platform for others, I developed a singular artistic aesthetic that subversively challenges perceptions of gender and social politics.   In the last twenty five years of running Sideway, I have expanded my artistic voice into the fields of directing, playwrighting, and acting with one mission: to challenge my own perceptions of the world.

Growing up in a Jewish home, I learned the Talmudic concept that no answer is greater than the question that is put forth.  In my art I pose more questions than I offer answers.  I utilize theater as a means to question the world around me.  I challenge my own previously accepted ideas in hopes that the audience might question their own preconceptions.  My Judaism also effects my art making through the concept of Tikkun Olam, which is a belief that the fractured world can be healed one small gesture at a time.  I advocate for theater as an agency for healing our world, even if that means simply effecting the world of one audience member or one participating artist.

Growing up in Chicago I was exposed to many styles of ensemble based theater: visceral Method acting, intellectual literary adaptation, and improv theater that was collaborative, jazz-like, and spontaneous.  My aesthetic combines these three forms: among my collaborators I create an ensemble atmosphere where the collective feels the freedom to explore theater pieces with jazz-like spontaneity.  This experimentalism leads to emotionally visceral discoveries and personalization.  Providing structure for this emotional grittiness is a scaffold of intellectual theory that is considerate, deliberate, and allows for reflection.  By erasing the hierarchy between the artists’ intellect, emotion, and unconscious expression, my brand of theater offers a holistic exploration.  This is not “in your face theater,” it is theater that is intended to get equally in your mind, your heart, and your soul.

Growing up as a young artist there were two events that galvanized my artistic aesthetic.  When I was thirteen, President Reagan threatened to abolish all government funding for the arts.  One day I visited Chicago’s Art Institute and pushed past picket lines.  The demonstrations were responding to art pieces such as Andres Serrano’s “Piss Christ,”  Robert Mapplethorpe’s explicit photographs, and Karen Finley’s theater work on gender and identity.  On one side of the picket lines Chicagoans were arguing for the value of art.  On the other side they were arguing for censorship because they believed that art is dangerous.  At that moment I realized that art has value because it is dangerous.  It was then that I knew that I wanted to be an artist and to make art that is provocative, socially relevant, meaningful, and necessary.  Finally past the picketers, I bought a t-shirt with a primitively drawn American flag and the words emblazoned on the front, “Fear No Art.”

Growing into a self actualized artist did not occur until after I graduated from Northwestern and moved to New York City.  In the days immediately following 9/11/2001 I stood in a dilapidated theater on the Lower East Side among other artists from the indie theater scene.  We were meeting to provide a safe space within which we could raise our voices.  I gave a speech which was equal parts desperate heartbreak, a rallying cry, and a manifesto for my hopes and dreams for the future of our theater community.  I delivered a call-to-arms encouraging us to make art in the face of fear.  At the time, I did not think about the “Fear No Art” t-shirt I bought as a teenager.  I realize now that this mantra has always flowed through my artistry.  I have been my most brave, fearless self when making art.

Growing as an artist is a never-ending process, but I finally feel as if I have grown fully into my artistic voice.  I can now stand squarely in my belief that I should offer a sideway view of the world that poses questions more than answers.  I feel confident that my holistic valuation of intellect, emotion, and the unconscious allows me to present art that is as valuable as it is dangerous.  I am subversively provocative and socially relevant by simply challenging my own beliefs.  Overcoming personal fear in my own art making I can inspire others to do the same.  I believe that all these artistic actions have contributed to Tikkun Olam, and that the fractured world has been healed one small gesture at a time.